After the Cold War, many expected a New World Order, with favourable conditions for international trade and investments. However, over the last few years, we have seen rising protectionism, geopolitical tensions and a stagnated World Trade Organization. Has the New World Order envisioned by so many instead turned into a New World (Dis-) Order?

Join us as our Secretary-General, Susanna Zeko, enlists the help of trade experts Anna Stellinger, Head of International Affairs at Confederation of Swedish Enterprise and Johan Norberg, Author and Historian, to dig deep into the current state of international trade.

Everything we do at ICC aims to promote international trade and investment as vehicles for inclusive growth and prosperity. Over the years several phrases have been used to explain certain traits of trade policy. Some of these are mentioned by the speakers in the video above. But what do they mean and – the key question – are they as free trade-oriented as the users want them to sound?

”Trade on mutual terms, where every company plays by the same rules, regardless of where they come from or where they conduct business.”

In short: the guiding light for free trade. When all actors follow the same set of rules, it leads to open and fair competition which in turn drives innovation.

”The narrative of the EU’s new trade policy entailing a vision of more independent and firm action internationally to promote EU’s interests.”

A relatively new concept, launched by the European Commission during the consultation process that preceded the EU’s new trade strategy. While the word ”open” is meant to entail continued openness for trade and investments, many have been worried about the rest of the phrase and whether it indicates a more protectionist stance.

”American law from 1933 with demands on American institutions to ensure public procurement of domestic products. One of the first decisions from the Biden administration was to strengthen this law.”

Protectionism refers to policies that restrict international trade, usually with the belief that it will improve economic activity domestically. Protectionism can take different forms, from explicit bans on import and export to more implicit forms of bureaucratic headaches such as demanding that data is located within a certain market, etc.

Can you figure out which acronyms we are looking for in this trade-inspired crossword? 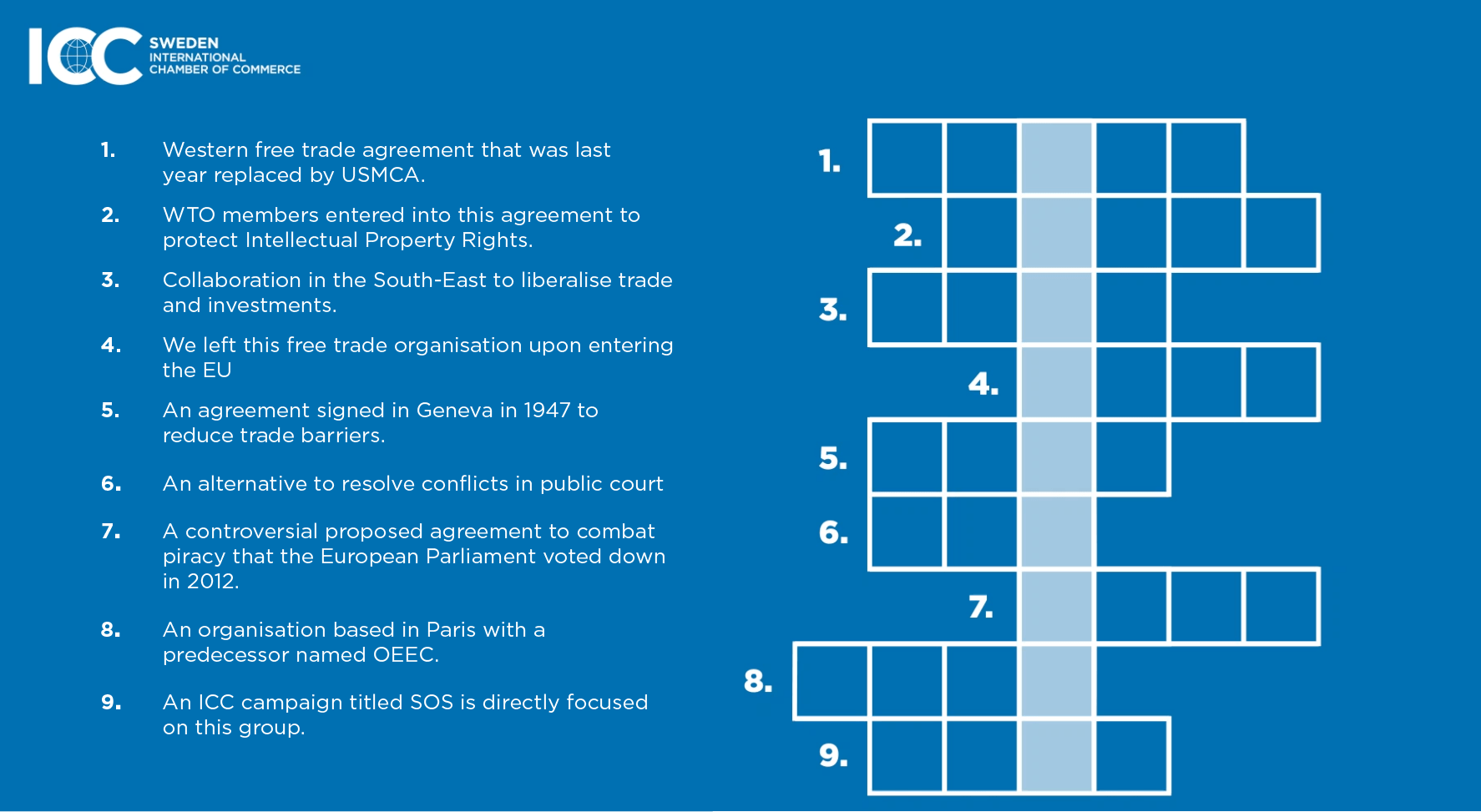 Check if you got all the answers right here!

Trade in a New World (Dis-)Order was produced by ICC Sweden with the help of Wonderland Events.